Lightspeed Issue 88 is on sale!

September 01, 2017
The September issue of Lightspeed Magazine is now available for purchase! I'm really excited about it for several reasons. First, the incredible cover by Alan Bao: 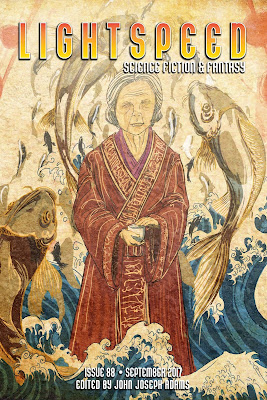 It's a smaller version of the illustration he did for my short story, "The Last Cheng Beng Gift"!! It's my first ever story to become the cover story for a magazine, and hopefully it won't be the last!

Secondly, I share an incredible table of contents... I'm in this issue with stories written by Genevieve Valentine and Tobias S. Buckell (who writes incredibly fun Caribbean space opera!!) and the non-fiction is by some of my favourite fiction writers, Amal El-Mohtar, Theodora Goss, and Joseph Allen Hill!!

Not only that (sub-second-point??), while my story goes live in the first week of September, my Clarion classmate Giovanni de Feo's story, "Ugo" goes live in the last week of September! That's like, a werejelly sandwich!!! Gio read his draft of "Ugo" to me and my roommates out loud, and at the end of his reading, I burst into tears. I'm so excited to be in this issue with him, and with that story, too!! It is a story of time-travel, determinism, the resentment of giving up dreams for some pre-determined narrative, and sacrifice for loved ones. I hope everyone else will recognize how great a writer he is!

Thirdly, it's Issue EIGHTY-EIGHT which is a really really really auspicious number in Chinese numerology!! "Eight" in Cantonese sounds like the word for "prosperity" so whenever people can choose a good number to use (for say, car license plates, or phone numbers), there's sure to be someone claiming some number of 8s in them.

And finally, my story goes live on the Lightspeed website next Tuesday, Sept 5th, which is the day of the Hungry Ghost Festival itself! It's the fifteenth of the lunar month, which makes it the peak time when ghosts can get out of the Underworld... most people celebrate it around then, although some diaspora communities will caution their children to walk carefully throughout the whole month. I will attempt to attend one of the all-day rituals at the Thien Hau temple in Los Angeles Chinatown this weekend!

You can purchase the issue right now, or wait as the content is released. I will post on the day my story goes live with the full illustration by Alan Bao!
fiction i write short story

June 11, 2009
The [completely optional] theme for the 3rd Asian Women Blog Carnival is:

Intersections between Culture and Sexism

For many of us, "white feminism" tends to be our introduction towards recognizing sexism, racism, and other kinds of -isms that are relevant to our lives. But because we come from varying cultures, what others may call sexism, we call a cultural trait (the hijab is a prime example). Occasionally, we may have encountered sexism in our own cultures, but we never thought about it that way until after coming into contact with other cultures.


Here are some questions you may want to tackle for this carnival:

- How does sexism manifest in your cultural context?

- Do you find resistance from peers towards naming an incident sexist due to cultural factors?

- What do you think of the notion some non-Asian feminists have that imply you might be too immersed in your own culture to recognize sexism?

- From your own cultural perspective, do you think sometimes, North American mainst…
Read more